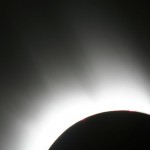 About 10 years ago I decided to build an observatory. I’m finally getting around to doing it. My reasoning for building it has changed down the years. Initially I wanted to build it in order to have a serious imaging and research setup, now I want it for convenience. I want a setup that I will use – far too many good nights are wasted by not taking the scope out because I don’t have enough time, or it’s just too inconvenient to set up properly. Any of you that own a telescope, particularly something over 200mm will know that a certain level of dedication is required to take it out every night. In my case I have to go to my mothers where my scopes are, set up on the patio, align and start observing. That takes about 15 minutes. However large scopes are not ready to use right away for any serious observing, they need to cool down. Looking through a scope that has not cooled is a bit like  heat shimmer particularly at high magnifications. The cool down can take a couple of hours. And then you probably need to tweak the collimation as carrying the scope out from the house and setting it up may have caused slight movements in the optical path. All in all it takes at least a couple of hours to get the scope to a condition where you can observe at high magnification to the scopes potential. This being Ireland, the clouds will have rolled in my then!

The solution is to have an observatory. The scope will cool down with the ambient temperature, and since it is fixed the collimation is unlikely to be far out. Setup should be just a matter of popping the roof, turning on the power, and aligning the scope.

The only site I have to build an observatory is in my Mothers garden. This is a less than ideal site being in suburban Dublin, with light pollution to the north, and buildings to the South. However there should be decent skies at over 30 degrees in the south and East. If I really want to catch the Southern faint fuzzies I can still take a scope into the Wicklow Mountains!

Heres the plan for the observatory: 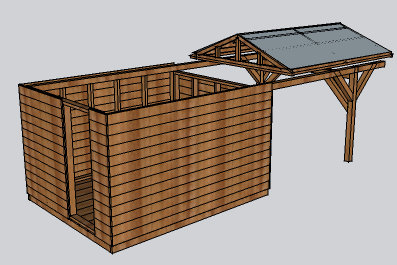 It’s a common enough design, commercial plans are even available from places like www.skyshed.com. It’s basically a garden shed with a roof that slides off. I’d looked at garden sheds and they were not up to the task, even the more expensive ones didn’t have the strength that I’d need. And would require work (or expense) to alter for the roll off roof. So I’m planning to build by own. Construction will mainly be 2×4’s, planking on the floor, shiplap on the walls, 4×4’s for the roof support. Sunk 2 feet at least below the surface will be a concrete base on which a steel pier made form box section will be added and finally the mount for the scope. So far it doesn’t look like much: 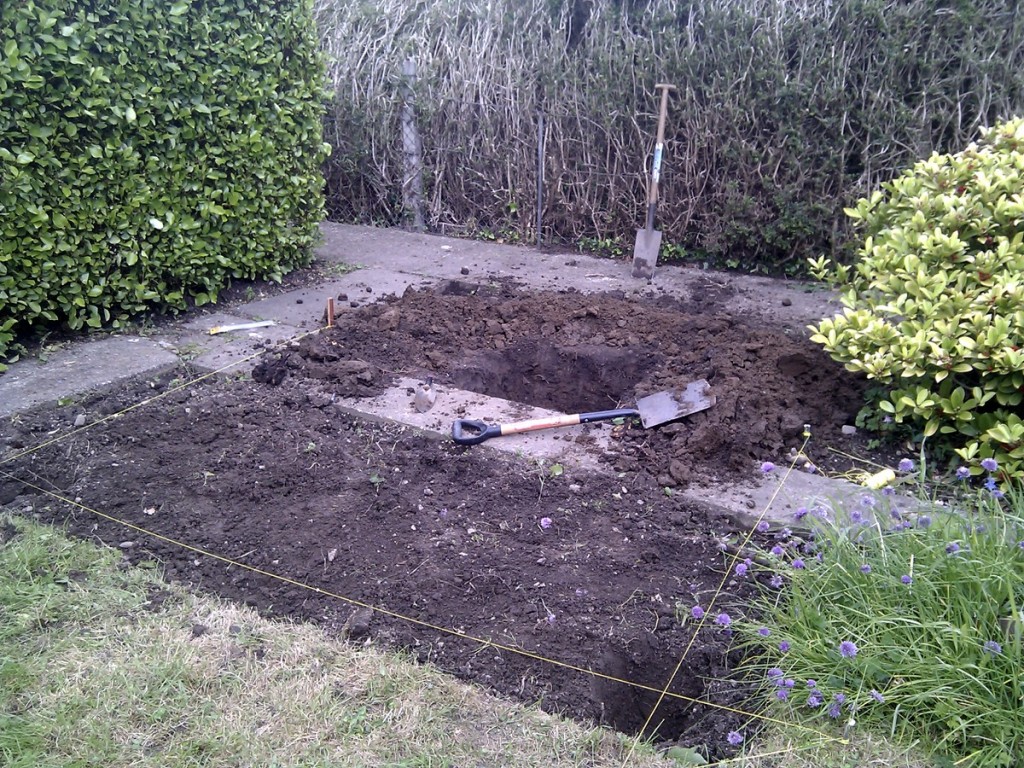 The ground has been cleared of the rhubarb that had been growing there for 30+ years – it’s now relocated out of shot. And the potatoes that were growing beside the chives are gone. The corners have been dug to allow foundation supports to be poured. I did that last weekend. The large hole in the middle will be the foundation for the mount. That will probably be the last thing to get done. I’ll get the observatory up as I can use a tripod mount in the meantime until I get the pier built.

Next up I have to work out exactly what wood and other bits and pieces I need, order it, and spend a good long weekend putting it up! On to Part 2!

One thought on “Building an Observatory – Part 1”