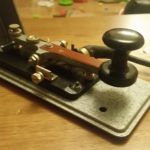 After passing my Class B Amateur Radio licence last year I intended to learn Morse Code in order to get the Class A license, and a “two letter” callsign. The morse requirement for a Class A license is to be able to rend and receive a paragraph of plain english text, sets of numbers, and a set of special characters and pro-signs, at at least 5 words per minute. I passed the exam in February, though I would advise finding out the structure of the exam in advance – I didn’t know what special characters were on the exam until the day or two before and had to hastily learn them!

So how do you pass a 5 WPM morse exam? At that speed you have time to think about the letters and don’t need to have the instant recognition by sound that higher speeds require, and you can also focus on one character at a time and not need to develop the mental skill of remembering several letters in your head or remembering the ‘sounds’ of words. Basically, any method that lets you learn the code will do. Start with a couple of letters and build up as you become familiar with them. And practice. I take a paragraph from whatever I’m reading, or car registration plats if I’m in traffic and mentally tap the di’s and dah’s out. Before long you’ll know the characters well enough to pass a 5 WPM test. Actually you’ll probably start to find that characters at 5 WPM is very tedious and instead be more comfortable with a ‘Farnsworth’ speed where the characters are sped up to 8-10 WPM, but the spacing between the letters and words is still around 5WPM so you have time to process them and write them down.

The thing is though that 5 WPM is very slow, even with a Farnsworth timing, and not really suitable for use on air. You can make QSO’s at that speed but it’ll be too slow for most (of the typically impatient!) operators out there. So how do you improve your speed?

Firstly try Rufz (http://www.rufzxp.net/) or it’s unix/mac equivalent QRQ (https://fkurz.net/ham/qrq.html). These will give you callsigns in morse and you type in the callsign you hear. If you get it right, the next one is a little faster, get it wrong and it slows down. Using this approach you will find that you are able to copy faster and faster. At best I can now copy at 15wpm, though typically I’m still around 11-12wpm.

There is a mythical ‘metal block’ that people mention online where you cannot progress faster until your brain instinctively knows what letter is what sound. If you find, as I still do, having to pause for a split second to distinguish L (.-..) and F(..-.) in your mind, you have not reached the required level of mastery. How do you progress past this point?

The first option is just to practice more. During the world wars operators learnt morse code to high speeds by sheer practice of sending and receiving and without any tapes, apps or online tools. It seems from reading some accounts of the time that almost anyone could get to a high degrees of proficiency in morse, so the idea that “you just aren’t able to” is rubbish; though there were very high speed operators that seemed to get to speeds that points to some innate skill.

Another option is to relearn morse code a different way – using the Koch method. This comes from work done by the German psychologist Ludwig Koch who ‘s method involves learning the characters at full speed (~20wpm) at the outset, but starting with only two letters. Then as you can copy those at 90% correctly, add another letter, and so on. I tried to learn this way initially and it just didn’t work for me – after even getting to 4 letter I was just hearing noise and couldn’t distinguish. Other people swear that this is the only way to learn, so your mileage may vary. Use whatever works for you. I’ve now gone back to using the Koch method since I now know the morse alphabet and I’m finding it much easier to make progress. Hopefully with a mix of this and using rufz/qrq I’ll get to a level of proficiency where I can comfortable operate CW on SOTA activations.

As you can tell I’m still learning morse. But I thought it was worth writing down these thoughts for the benefit of anyone else at a similar stage. If when I reach the Zen Mastery levels of copying CW and can decode it as easily as Neo’s Kung Fu in the final fight scene of The Matrix then I might update it with some sagely wisdom 🙂

One quick word about QRQ. It hasn’t been updated in a few years, but the maintainer is still active. I’ve hit bugs with it and am working to get them fixed as well as adding functionality to allow you to practice using strings of text rather than just words or callsigns. So hopefully there will be an updated release out before long.