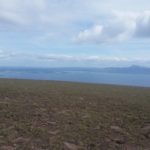 While in Mayo last week I decided I’d take a few hours to try a SOTA activation. There are plenty of summits to choose from, 8 around Achill and another 25 between the Nephin range and Ceide Fields. Robert Lloyd Praeger in 1937 wrote that “the Nephinbeg range of mountains is I think the very loneliest place in this country” and so it’s no surprise that many of the SOTA summits here remain unactivated. Slieve Carr, the highest mountain in the Nephin range, is about 14km from the nearest road and is surrounded by bog. An activation would probably require an overnight camp, but you would be camping in Irelands first Dark Sky Park so the view of the un-light-polluted cosmos alone would be worth it. All that though is part of the allure of these mountains. If you do feel the call of wild Mayo and want some help or perhaps a guide, get in touch with the nice folks at www.terrafirmaireland.com.

I opted for an easier summit – Slieve Aghkerane as it is on the OS map, or Corraun Hill East Top as it is in the SOTA database. EI/IW-032 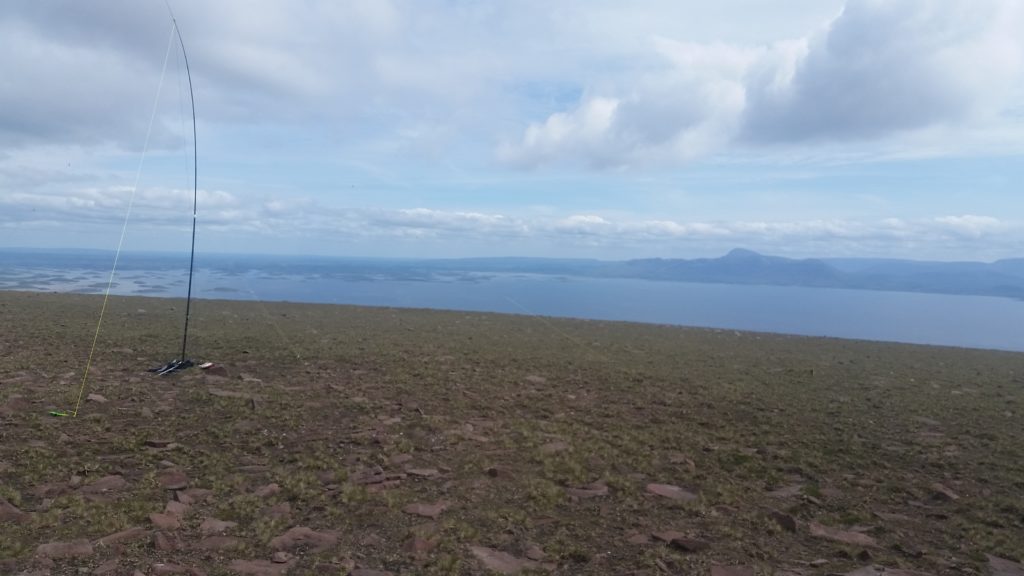 Station at the summit

The easiest route looked to be to start from the bog road just north of Droichead Bun na nAeu. From there I followed the bog road for 1.5k or so before ascending a spur to the coll at 421m. From there it’s a couple of km to the summit. The spur to the coll is mostly heather and bog, though not difficult terrain on a dry May morning. Still with a steep incline I took my time. There are no paths here except those made by the abundant sheep which crisscross the mountains. From the coll the landscape gives way to rocks. Lots of them. So many that previous visitors have taken to making several cairns along the way to the summit – there are sufficient natural resources to build a road! After making my way from cairn to cairn I reached the summit at 541m. I set up my 20/40m inverted V a little south east of the summit, there was very little wind and since I was only working with 5W I was hoping for contacts towards Europe. As I sat down to set up my rig i was pestered by midges, and I’d no repellent, so I had to wrap up to keep the little buggers away from my skin. My first CQ on 40m was returned by a station in Belgium, ON4CB,  giving me a 5-5 signal report. The optimism of that easy first contact was tempered by having to wait 10 minutes before getting a German station, DM5HF/P. After that though contacts dried up, calling CQ on 20 and 40 didn’t get me anyone and the couple of stations I replied to could not make out my callsign. I switched to 2m and not unsurprisingly found the band dead for FM and SSB, calls on the calling frequencies went unresponded. I was nearly an hour on the summit now with only two contacts, but I was determined to keep going to get 2 more QSOs, so I tried calling the local repeater. Thankfully EI7IX in Wesport came back and we were able to get a good QSO on FM simplex. Surprisingly I also managed to open repeaters in Cork and Dublin, unfortunately EI4KH/M near Kinsale who I met on the cork repeater was’t able to work simplex and I wasnt able to keep up contact with Declan EI6FR on the Kippure repeater to try and arrange a HF contact. I decided to try 40m again and my chance heard G0PEK/P calling CQ, and luckily they heard me (3-1!) and I got the fourth QSO, he was also working QRP and only afterwards did I realise that I was transmitting to them at 2.5W. After another 10 minutes or so of calling CQ I packed up and returned to the start the way I had come. The round trip took me just over 5 hours, but I was carrying a heavy enough pack (food, bivy bag, storm shelter) as I didn’t trust the weather forecast! A fitter operator with a lighter pack could probably do this 12km round trip a bit quicker.

Despite the remoteness of most of the summits in Mayo there are a couple of easy options for though with limited time: