I thought I’d try taking part in the IRTS 40m counties contest from a SOTA summit. My location and antenna at home isn’t great, so I figured that since it was a nice day that operating with only 5W on a summit would still be better than operating at home! The band was pretty poor for the contest but I did get 7 contacts and so managed the activation on 40m alone. I did bring a 2m antenna also just in case, and managed to get plenty of contacts into Wales and a Summit-2-Summit contact into the Pennines. 20 QSO’s altogether. 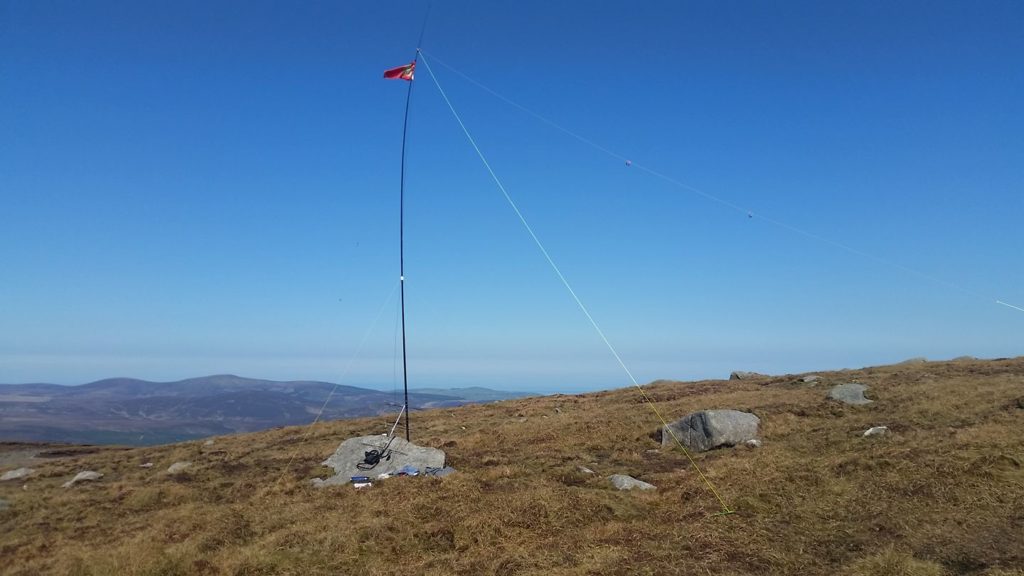 I used the sotabeams 40-30-20 linked dipole with a 7m telescopic fibreglass post. The linked dipole is light and the only awkward part of transporting it is needing to bring the pole, but it’s light enough too and I just strapped it to my backpack. I took the easy route up from the “ESB” car park. The coax on the antenna is RG-174 which in terms of losses is probably the worst standard cable you can use, but when you are only using about 10m of it it’s not that big a deal, and it’s easier than carrying 10m of RG-58 or heavier. I’ve decided to use a ring about 3m up with guy lines to support the post. This isn’t really necessary as it will stay up with just the dipole and main guy line. But having the lower support means it will stay a little straighter, but also it means that it’s easy to move the dipole if needed. Probably not something you’d bother with on an activation but certainly something that’s handy to be able to do in a contest to try and improve your chances of working stations in different directions.

The setup in this photo was just a little bit away from the summit of Tonelagee, which had probably over 100 people stop for lunch while I was there. Many popped over to ask what I was doing, although conditions were poor I was able to find a couple of strong continental stations for them to listen to. A fun activation and hopefully I’ll get another few in over the summer.