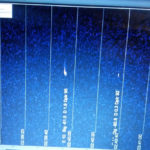 When I was in school, I remember being told that it was possible to tune an FM radio do a free frequency low in the band and during a meteor storm you could ‘hear’ when meteors struck the atmosphere as the FM signal from distant radio stations would be reflected back down from the ionised meteor trail. This may have been possible as back then there were plenty of high powered FM stations from Eastern Europe using a lower portion of the spectrum and receivers often went below the 88.5 that is the limit on the dial now. But I never heard anything. Over the years as my interest in meteors and radio was peeked I looked into it again, but the number of stations to use was dwindling and there were few artificial sources that could produce an audible ping.

But a couple of years ago, when I started looking at getting my radio licence, I started playing around a lot more and with cheap USB dongle radios (€10 from ebay) building something to detect meteors seemed pretty possible. Of course I wasn’t the first to think this and Paul Hyde from the British Astronomical Association had even written articles on doing it for Sky at Night Magazine (the articles are available from the BAA Radio Astronomy Group at https://www.britastro.org/radio/downloads.html ). The plans are pretty simple, build a yagi antenna and hook it up to a usb radio and use that to detect meteors from the GRAVES radar. Though Paul advocated using the morse sensitive (and expensive) FunCubeDonglePro+ rather than my €10 ebay RTL SDR.

GRAVES is a French Space Surveillance System. It consists of a pulsed radar transmission on 143.050MHz which ‘bounces’ off satellites and space junk and the resultant echos can be used to build up the orbital path of these objects. However when a meteor ionises the sky (somewhere around Dijon) the signal can also bounce back to be detected by a civilian station. I’ve also seen people detect large satellites from the radar pulses but I haven’t managed to see that yet myself.

My first attempt at getting this working was only partially successful. It was in my attic, and the roof tiles seem to attenuate radio signals around 2m, I was using cheap receiver, and there is a hill in the way. And I didn’t understand SpectrumLab, the software used to gather the data. Still after some help from Michael O’Connell (http://astroshot.com/) I was getting some detections.

And that’s where things stayed on and off for a year or so until I finally got around to setting up the station permanently at a better site. Now I’m using the FunCubeDonglePro+ and a windows laptop in a shed all connected to an antenna on the roof. 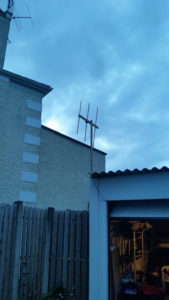 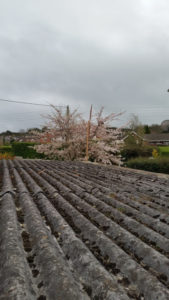 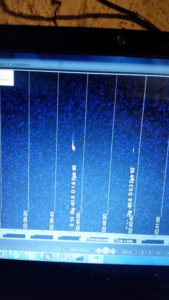 It’s still not an ideal location! And we’ll see how much a problem that tree and hill will be over time! But it’s good enough to detect meteors as the spectrum on the right image shows.

It’s been in place for 3 weeks or so now, and I’ve managed to get some data, and thanks to python, pandas, and matplotlib here are some plots! (code at https://github.com/albertw/astronomy-notebooks/blob/master/Meteor%20Data%20Processing.ipynb ) 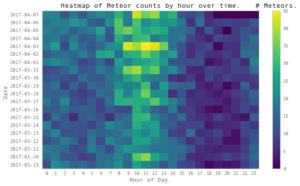 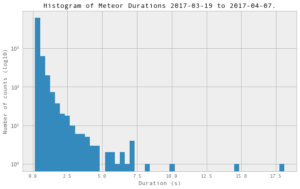 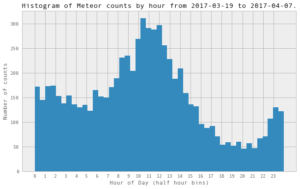 The middle plot shows the duration of the meteor detections. As expected most are short, with a couple going over 10 seconds. The rightmost chart shows the time of day that we detect meteors – I’m surprised by this one and haven’t quite managed to explain it. Why is there a peak in detections at local noon, a lull in the evening before picking up again before midnight. The rotation of the earth in space relative to the bits of grit in space must be behind this, but the reason for that specific profile is still perplexing me. And it’s not thrown off by specific events, the leftmost heatmap shows that the pattern occurs daily.

This project is still very much in the exploration phase. Among the things I need to look at are whether to raise the height of the antenna, use a preamplifier, use a less lossy coax, and of course how to make this data accessible and useful to others. The nice folks at http://www.radio-space.co.uk/forum will no doubt have advice to offer!

One thought on “Detecting Meteors from radio reflections”