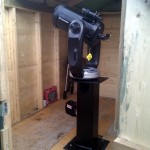 Well we finally got first light! ok it was sunlight reflected off the clouds but it counts!

The first job today was to drill down into the concrete base to anchor in the 12mm bolts in place. The local building suppliers had Rawl R-KEM which is a two part epoxy that comes in a 300ml tube, it mixes in the nozzle so its easy to apply. With the bolts in place the pier was put in place and leveled: 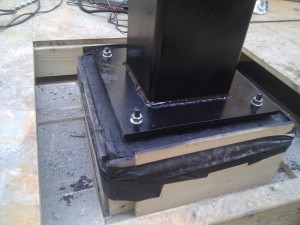 If you look closely you’ll see that the the pier is not resting on the concrete. This is because there are nuts below the base plate so that the pier can be accurately leveled on top. For a Alt-Az mount you need the base to be level, and for the moment, until I get a decent wedge at least, I’ll be using the scope in Alt-Az mode. This setup probably weakens the pier a little, but Alt-Az will be mainly for visual use so thats not a problem. Once I get a wedge or a new mount I can rest the pier on the solid concrete. With a equatorial type mount all that’s important is that you have the polar axis aligned correctly, It doesn’t matter if the base isn’t perfectly level. Here’s what it looks like freshly painted and leveled and with the holes for the scope drilled in: 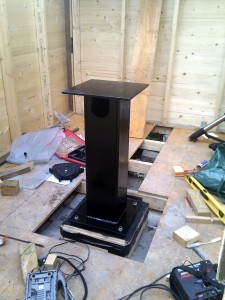 And with the scope on to (and after tidying the place a bit!): 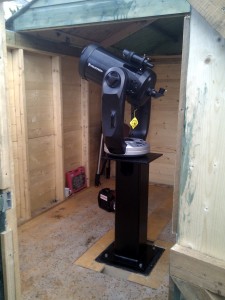 If you look closely you’ll see that the scope isn’t centered on the pier. That’s because if you drill the holes in the center there is no room for a nut to turn against the inside of the box section. Yep, I found that out the hard way. So it’s slightly off center. Drilling through 10mm steel is a tricky process. You need the right drill bits and a drill that you can drill slowly with. Start off with the smallest bit you have, add oil to the area you are drilling as needed, and drill through slowly; then increase the bit size until you are at the needed size. In the case of the tripod screws for a Celestron CPC thats just over 10mm for the M10 screws. I used the screws that came with the tripod to attach the scope to the pier, the local DIY hardware shop didn’t have M10 bolts in the right size. 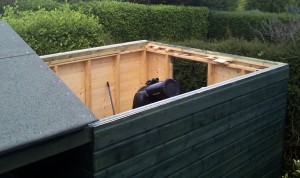 If it looks like it’s a bit low down in it’s because it is. I have another 20cm of clearance between the scope and the roof when it opens. I’ll leave it like this for now, but if I need to get lower down targets before I get a wedge I can raise it up with longer bolts and wood as a support or something.

One other job I did today was to put in a 3×2 piece of wood to reinforce the 2×4 on the far side that has the castors in it. I’d done this previously with the other side. This worked very well. So well that I need to put stops to make sure the roof doesn’t fly off. I can easily move it with one hand (so can my mother in her 70’s), and with a good push the roof will slide completely off!

I mentioned in the title that this is ‘Phase 1 complete’. The criteria for that was to be able to use the observatory for visual work. Phase N is to have a fully automated MPC designated observatory. There are a few phases in-between 🙂 The next steps will be mainly around comfort! I’ll build in a decent desk and chair, some storage, and sort out any snags that I notice while using the setup.