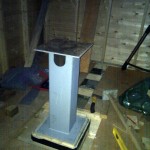 By the end of the weekend I should be able to get first light in the observatory!

Since the last update I’ve dug the hole out properly: 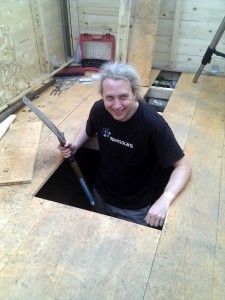 Digging this out with the floor in place made things a little harder, but it wasn’t too much trouble. Once that was done it needed a little shoring up and a few bits of wood to bring it up to the floor level: 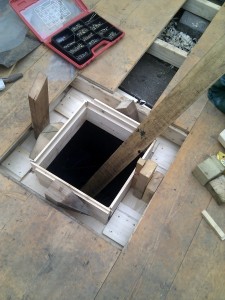 Next I had to fill that with cement. The guts of a tonne of the stuff, half a tonne of gravel alone, plus the sand and cement. That was far too much to mix by hand so I rented a mixer for the weekend. I got it all done in a day. 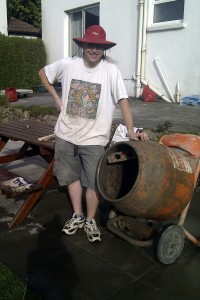 With the concrete base poured it was time to finally get the pier sorted out. I’d been debating how to do this for a long time. In the end I went with a design similar to what Michael O’Connell used. It’s a 10mm this, 200mm side of square box section with 350mm side square plates on either end. There is a small area cut out at the top so I can get at bolts, and 4 14mm holes in the base to anchor it to the concrete. I’m still not sure if amateur astronomers have much of a clue about building piers. The lack of actually engineering documentation is a problem, and not something that many amateur astronomers are trained in. This results, as a trip to the cloudynights forum will show, with many bits of anecdotal advice on how to build piers, combined with plenty of tales of how various ideas have failed! Thankfully there is one article written by someone with some engineering background on cloudynights which goes into some detail on pier design. The summary of that is that thickness matters so 10mm thick steel seemed a good idea. One thing I have observed from structural engineering is that a box will wobble less than a tube, so going with steel box section seemd a good idea as well. I have no idea yet how this pier will perform but I’m willing to bet that any harmonics that the pier exhibits will be far less than the error on the CPC motors and tracking. Once possible area that could be improved on the pier would have been the addition to fins or gussets at the base, but as it is I _think_ it’s over engineered! I ‘designed’ the pier using Google Sketchup and Woodloe Engineering (who also did the steel work for Tallaght Stadium) made the pier for me. Here it is in the Observatory tonight on the pier (it’s actually painted grey, the cameraphone flash has some strange colour balance!): 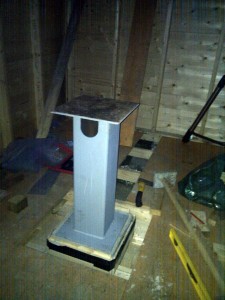 One suggestion I did get was to build a two piece pier so that I could get the maximum height for the scope, but if I upgraded to a proper mount in time I could still use the same main base. I didn’t do that simply because of the cost. The downside is that I wont be able to go quite as low down in altitude with the current mount, but that’s not a big loss given the site.

Next I need to fix that to the concrete base and ensure it’s level. The plan there is to drill holes into the concrete and hold 12mm bolts in place with epoxy. Then mark out the holes in the top of the plate and mount the scope on it. Hopefully I can get that done this weekend and get first light soon! On to Part 7!

One thought on “Building an Observatory – Part 6”