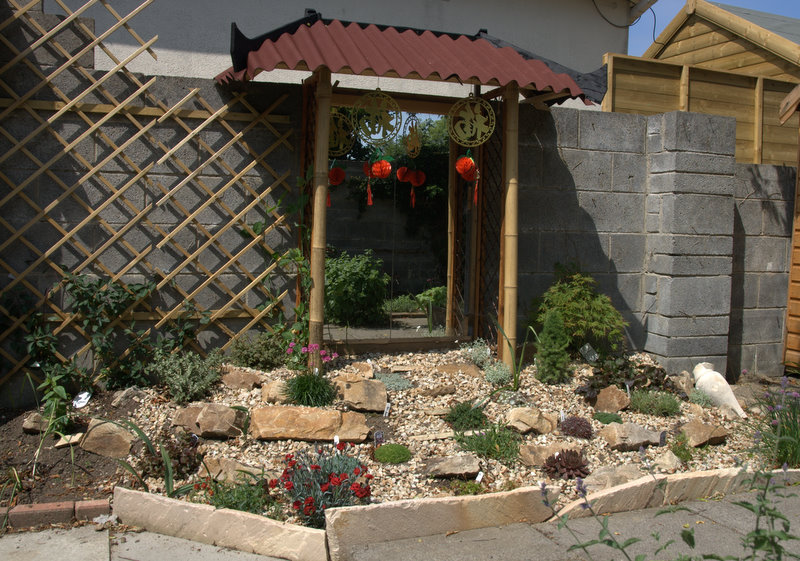 Someone pointed out recently that I hadn’t updated my posts about the rockery I started last year. Well here’s what it looks like now. END_OF_DOCUMENT_TOKEN_TO_BE_REPLACED 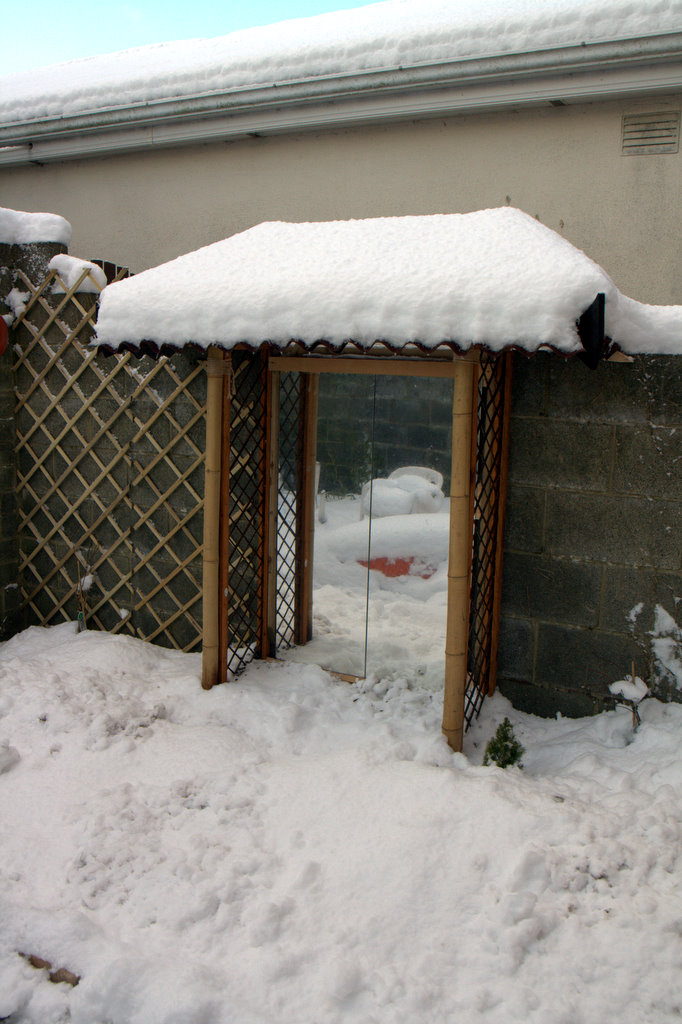 Under those 8 inches of snow you would see a roof. The roof itself is made from a red ‘coroline’ bituminous sheet from B&Q. It supported by the frame that you could see in the previous blog post; the support isn’t designed to hold much weight but it seems to be doing ok with the snow. And overall has a bit of a chinese feel to it.

The mirrors were the secret part of the garden. Two ikea mirrors that we had in the kitchen. The idea is that it should look as though its a gateway into another garden. What you are actually seeing is the one bit of orange on my kayak that isn’t covered in snow.

edit: I suppose I should mention a bit more about the mirrors. They are regular mirrors and not any fancy protected garden mirror. Behind them is a wooden frame so that the mirrors are not right against the concrete. They are held in place by a pieces of wood in front of them at the top and bottom (the top one is visible above). Then the edges and the wood holding them in place are filled with silicone. That should, in theory, allow the mirrors & wood to move a little with temperature variations to stop them cracking and also give them a bit of protection from rain. So far its worked well, no signs of moisture damage or cracks and its quiet even on stormy nights.

A couple of months back Min went on holidays to the UK for a week. While she was away I brought my Mum to a local nursery to buy some plants. While there she found a honeysuckle plant and I thought it would make a nice addition to our garden to cover up wall that prior to that only had ivy growing on it for 15 years. I’m sure it looked nice back when the garden was well maintained but it was a mess when we moved in.

Then I remembered Min saying that she’d like a rockery, and that’s when what should have been a simple little project grew legs. A quick glance through any gardening book will tell you how not to make a rockery. Don’t just throw a few stones on the ground, plant a couple of dwarf conifers, sprinkle a bit of gravel and call it a rockery – its not one. It also became quickly apparent that making a tiny rockery wouldn’t work in the garden, it would need to basically take up the area along the wall. After clearing out the plants that were there and getting rid of the pesky ivy this is what the area looked like: 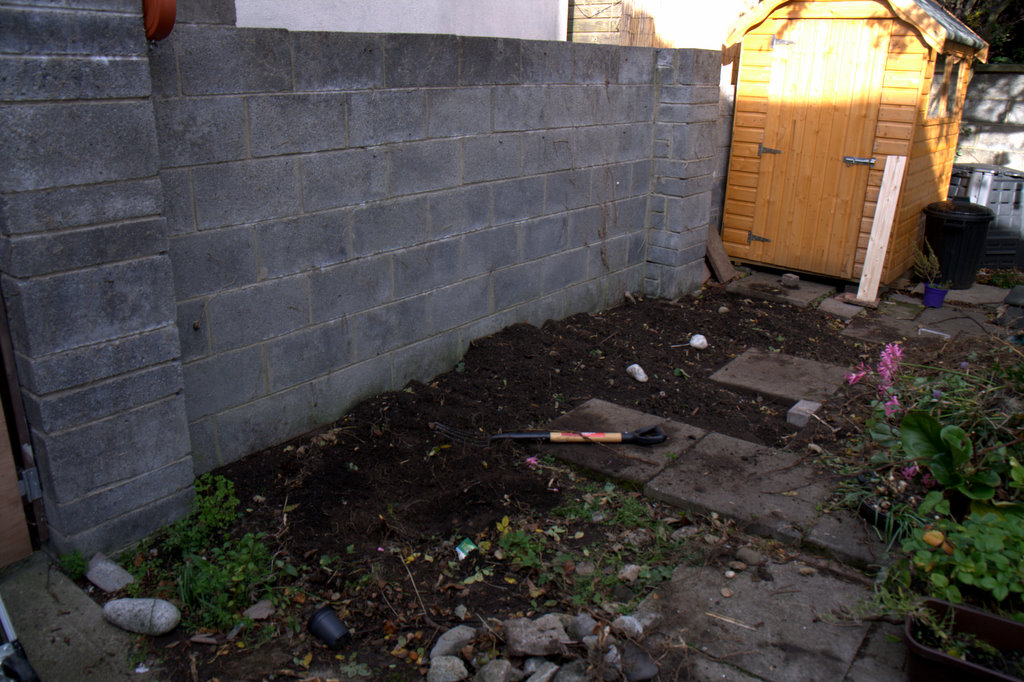 I decided that I needed this to be a slope. And it needed better drainage than it currently had. So it all got dug out and broken bricks and gravel were put in at the base and then the topsoil piled back on top.

Next came the problem of rocks. Since I had a week to do this (well 2 days off work actually) I had to take what I could find. A local stone merchant just happened to have a basket of sandstone so I bought that along with some broken sandstone slabs that he had. I didn’t get a keystone unfortunately, and I still don’t have one – that is something that will need to be acquired.

The bare wall had been annoying me though. The honeysuckle would cover it eventually but the garden would still just be a rockery slope with a climber behind it. How about putting a feature in the wall in the middle to break up the wall and generate something interesting? The honeysuckle could have one side and I could put something like a Japanese maple on the other side (ok not a climber but big enough to cover the wall in time; and hey I can always put another climber in). After a bit of though I decided to go with a Chinese style gate arch, I could use the slab pieces to create a rough staircase through the rockery and by using the low plants on that it would eventually look like an overgrown stair with the bigger plants on the side.

The problem here is that Chinese archways are hard to come by in garden shops. Not that I wanted to buy one, I just wanted to copy one! After going through many webpages on chinese architecture and more importantly looking at what materials I had readily available in the local DIY and garden stores I came up with a way to make the arch. Here’s how it started off, complete with the basic sandstone outcrop. 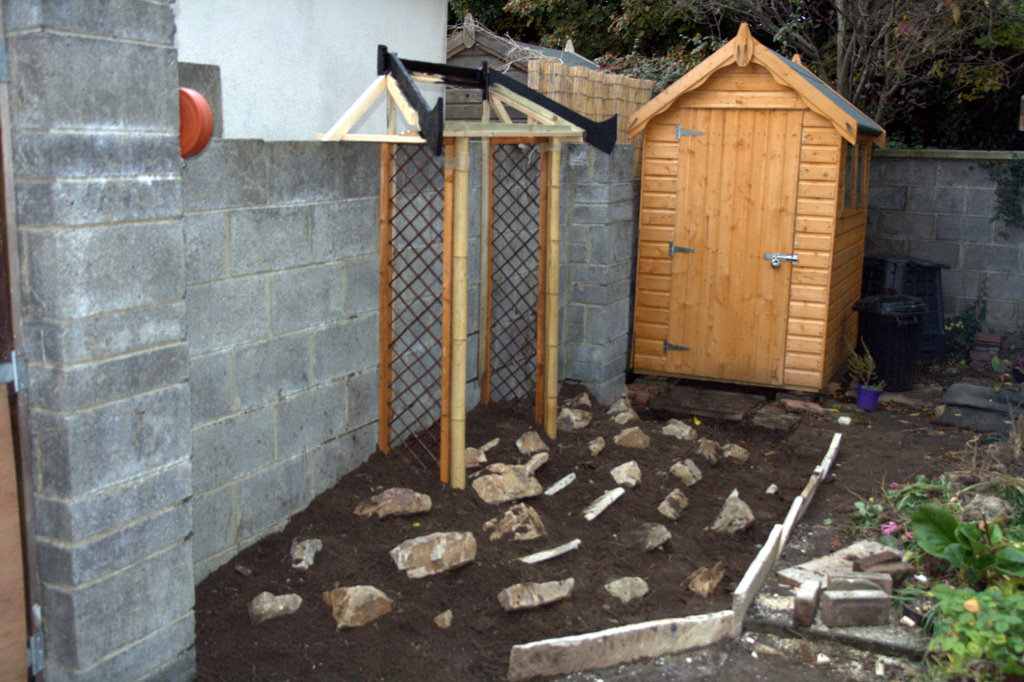 The bamboo poles and wicker trellising come from B&Q. The rest of the wood is mostly from the old skirting board I had left over when the oak flooring went in to the house. See what I mean about it really needing a keystone? I’ll have to source one in the spring, or go looking for a decent sized sandstone laughing buddah!

That’s roughly the state it was in when Min came home. Despite time off work bad weather meant I didn’t get much more done.  Since then though I’ve got the ‘secret’ component done, extra topsoil in, and even a few plants! I’ll go over that in future posts – the whole thing is under about a foot of snow at the moment and I’ve no pics of it.