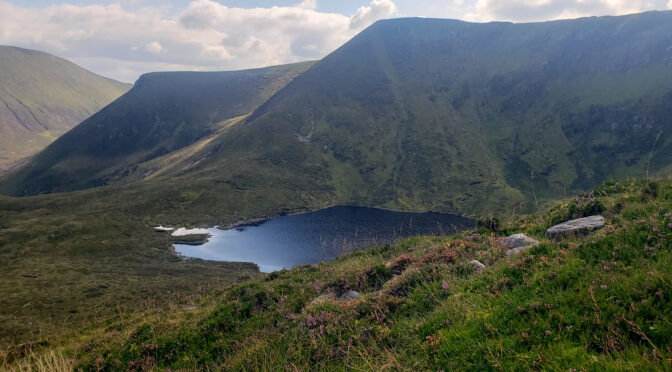 Ever since I first got interested in Summits On the Air, one mountain in the west of Ireland has been calling me. In the Nephin range in Co. Mayo lies Slieve Carr. At 721m it is not even in the top 40 highest mountains in Ireland, but as it is often referred to as ‘the most remote mountain in Ireland’ it had remained un activated.

Slieve Car along with Nephin Beg (activated for the first time only a few weeks ago by Shane G6WBS) are the two main summits in the Wild Nephin national park, an area that now comprises 11,000 hectares of blanket bog. The summits rise sharply from the bog and tower over 500m above the rest of the landscape.

Since the establishment of Ballycroy National Park in 1998 a lot of work has gone into making this remote landscape more accessible for visitors while still conserving it’s pristine dark skies, active blanket bog systems, and right flora and fauna. The area now has several marked trails, shelters and dark sky sites as part of the ‘Mayo Dark Sky Park’.

Yet Slieve Carr still manages to retain it’s remoteness. From the west a bóithrin off the N59 will give you access to the Bangor trail which you can follow to Tomashiffin Mountain and then approach Carr from the South. This is a 14km trip one way and was the route I was planning on taking a couple of years ago and doing the route over a couple of days, wild camping in the National Park. Covid ended that plan but I had some time on a family trip to try and make a quick day trip to the summit. A 28k round trip through a bog was too far, and a quick look at the map shows the North approach is mired by wet bogs with no apparent paths through them. If I was going to attempt this I would need to cheat as much as I could on the Eastern approach.

The east of the range is mainly covered in conifer forest, which does thankfully have some tracks running through it connecting  the North East of the park, Altnabrocky bothy and Brogan Carroll Bothy with the road to Newport at Letterkeen. A quick check with some local guides confirmed that biking along these was possible and would take some time off my journey.

So on Wednesday morning I got a lift to the park entrance near the farm at Altnabrocky Lodge. At the gate I was met with the expected covid warnings, along with ‘do not enter’ construction notices. I took these warning to be for the farm rather than the forest tracks, and ignored them, hopping on my bike and heading the 7km for the Altnabrocky shelter. At the shelter there is a steep track up another 1.5km or so to ‘the steps’ which gives you access from the forest to the mountain. From here your first task is to climb the knoll in front of you; it’s only 100m ascent but the lush grass, heather and moss makes it difficult. Walkers from other parts of the country may be familiar with seeing well-worn tracks into the mountains with obvious paths – there are none here, you find your own way. From that knoll you have a choice, you can head west, and south of the lake to ascend Corr na Binne, or take the route I choose to head northwest and take the spur north of Coire and nGarru lake. On paper this looks the less steep option, but there were times where I had to put the hiking poles away and climb up on all fours such was the steepness. The climb is worthwhile however as the views across the lakes to Nephin Beg are spectacular. After that the ascent to the main ridge and North to the summit felt easy! The summit itself is rocky with a large cairn, said to be the burial mound of Daithí a 5th century King of Connaught. The view from the summit is commanding. With the exception of Nehphin in the distance, Carr dominates the landscape and you feel yourself towering above the blanket bog below with the mountains of Achill island visible in the Atlantic and the summits of Donegal in the North. From the steps I’d travelled about 3.5k with about 500m elevation.

But it was time to get the radio out and I quickly set up the arrow antenna and connected it to my FT-65 handheld. Almost immediately I was chatting to Dermot EI7IX, with the best 2m DX being with Patsy EI9CUB 170km away in Cavan. Next up was Dave EI5IMB in Bundoran, and as I was starting to set up for HF I heard Padraic EI9JA in nearby Westport to get the 4 required QSO’s for the activation. For HF I used my trusty FT817 and linked dipole on 40m and 20m SSB. The bands seemed quiet but I got reports of strong QRM on both bands from European stations. 40m yielded 7 QSOs with the short skip getting mainly UK stations. 20m was better for DX getting over 1600km to stations in Sweden, but I didn’t quite manage to finish my QSO with a Bulgarian station which would have added another 1000km to the DX range.

However I did manage a summit-to-summit contact with Daniel, HB9IIO, who was on the summit of Mont Pèlerin near Lusanne in Switzerland.

I spent over an hour on the summit, but after eating the bligatory sandwiches and having a couple of mugs of tea it was time to descend. The uphill work was done, but the longest part of the journey lay ahead.

I followed the same route back to ‘the steps’. The steep ascents on the spur that caused me problems on the way up caused my knees plenty of problems on the way down too. By the time I reached Coire na nGaru I was out of water so made a detour to the lake to relax and filter some more to keep me going. Back at ‘the steps’ I was sorry that I’d abandoned the bike in a ditch near the shelter, so another 1.6km walk beckoned. But it was mostly downhill so it wasn’t long before I was back at my bike and on my way. This time, on Ged’s advice, I headed south towards the Leterkeen Bothy, and most importantly it’s car park where I could be picked up. It was a long tiring cycle, but as Ged had promised it was mostly downhill. That 10k cycle added another hour and I was shattered when I got to the bothy.

All in all it was a 26km route. Far longer than I’m used to for activations but despite the soreness in my legs a couple of days later, it was worth it and I’m glad I got to mark Slieve Carr off the list of unactivated summits!

If you are thinking of tackling Slieve Carr my route is probably the quickest and shortest route. But do check with local guides, and for this I can thoroughly recommend Terra Firma Ireland, who can give you up to date local advice on access as well as arrange transport and bespoke guided hikes and adventures to meet your needs.