It’s taken a while but I’ve finally managed to activate my nearest SOTA summit! Two Rock Mountain is the highest of the three SOTA summits in County Dublin, at only 536m. Nearby is Three Rock Mountain which has great views over Dublin City and a transmitter site near the summit transmits most FM radio and TV to Dublin.

The easiest way to the summit is to park at one of the parking areas in Ticknock Forest. From there you can follow the wide and well paved path to the transmitter site on Three Rock. From there the path southwards towards the summit of Two Rock gives way to a worn mountain trail. As you climb the trail you become surrounded by heather and bogland leaving the pine trees behind. At the summit of Two Rock, or Fairy Castle as it’s also known, you will find a boardwalk to protect the summit from erosion.

It was a bleak and rainy Sunday afternoon when I ventured up. The views from the summit extend down into the Wicklow mountains but I found myself in fog and rain. A little west of the summit I found a boulder off the path which I used as my QTH. There was little wind so getting the antenna up was easy, though the rain did make operating difficult. I had to dry my log sheets in the car on the way home! 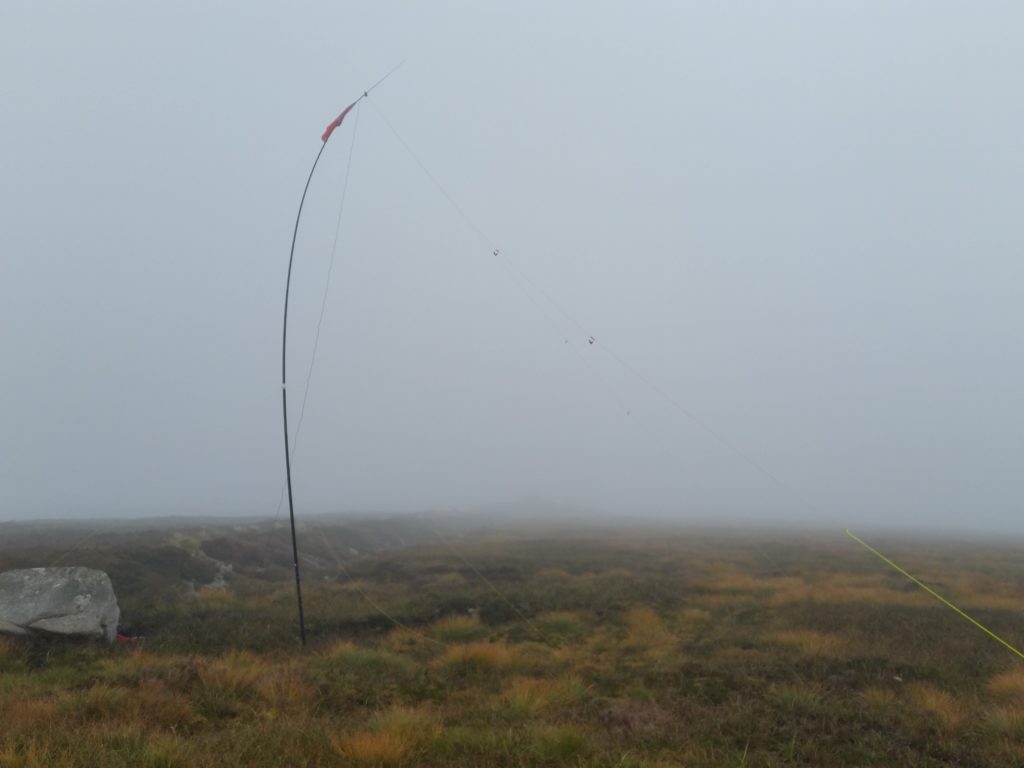 The reason I went up on this miserable day was to take part in the IRTS 40m counties contest. For the first hour I used my FT-817ND and had 17 contacts. After that I used the 450D (yep I brought two radios – it’s an easy walk afterall!) and with 25W managed double that in the second hour. 17 Irish counties and 7 DXCC’s were in the log. I think a small amplifier for the FT-817 might not be a bad idea in future.

Despite the poor weather there were plenty of people out walking, and many stopping by to see what I was doing. I’m convinced that more of this type of activity will bring more interest to amateur radio in much the same way as sidewalk astronomy has done for astronomy.

There are some other routes to the summit. For those on public transport the 44b bus services Glencullen and the summit can be reached via the Dublin Mountain Way.