One of the people at our table at the COSMOS star party this brought up the topic of long distance radio communications and the use of geostationary satellites to facilitate such communication. The idea of trying to image some of these satellites then came up and we discussed the possibility.

So last night I decided to give it a go.

Most satellites we see in the night sky, including the ISS, move relatively quickly overhead. Communications with these satellites would be limited to the few minutes that they are above us so would not be suitable for communication over long periods of time. They are also relatively close to us, the ISS orbits at about 400km above the Earth, so is only visible to a small part of the planet and so can not be used for long distance communication. What we need are satellites to stay in the same position in the sky and be far enough away so that they can see large parts of the planet.

The key is to place a satellite in an orbit that will cause it to have an orbit that lasts exactly a day, orbiting as the Earth rotates and so always appearing in the same point in the sky.

Working through the equations of angular motion and gravity (Wikipedia covers the details) we find that this orbit is 35,786km above the Earth’s equator. Here’s an animation to illustrate the relative distances and speeds.

So where is that orbit relative to us?

Well we know it’s along the equator, but since we are north of the equator we’ll need to look a little below the equatorial line (0 declination) to see the satellites. A little trigonometry give a value of about 7 degrees south. Mind you at this point I decided to check if my planetarium program (TheSkyX) listed these satellites and it did, so that was the end of the ‘back of the envelope’ calculations 🙂

Imagining the satellites is pretty straight forward, you point the scope to where they should be and turn the tracking off! This is slightly complicated by needing to ensure you are looking at the right part of sky (particularly declination) which is much easier when the tracking is turned on! I found the best approach was to leave tracking turned on until I was sure I was at the correct declination to image the satellites, then to turn tracking off. After that you can just move the telescope in RA to move to the satellite you are looking for. Your scopes goto function may not be of much help for looking for satellites with tracking turned off btw!

I didn’t have a preconceived idea of the magnitude the satellites would have so I picked 60s to start. This turned out to be a big over estimate in exposure with my target satellites over exposed! Here’s that first 60s shot of the BADR-5, BADR-6 and BADR-7 satellites. 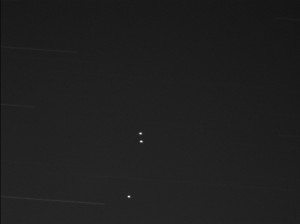 The brightest star trail at the bottom of that image is a magnitude 10.39 star. From looking through my other exposures all the satellites seem to be around magnitude +11.

This second image is comprised of 0.25 second exposures and spans about 25 seconds. So you can see the satellites moving relative to the background stars at the sidereal rate.

The satellites are not perfectly positioned and will probably have slight inclinations. I didn’t think to take a long enough exposure (without saturated satellites) to see that, but I expect you would see some obvious relative motion over time.

The BADR satellites above are part of the Arab Satellite Communication Organisation. The satellites are Eurostar E2000’s and E3000’s made by Airbus. They weigh about 4000-6000kg – I haven’t been able to find exact details for each satellite just the general class 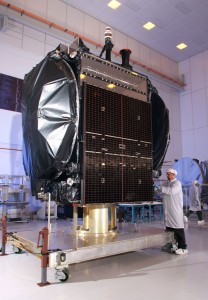 Here‘s a photo of a person next to the E3000. The solar panels open out into 2 ‘wings’ 5 panels wide each. So that gives you an idea of the total size. In effect we’re imaging something around the size of a bus from 35,000km 🙂

At that distance there isn’t much to see other than points of light. But here’s Astra 2A, 2E and 2F where some of your satellite TV comes from 🙂 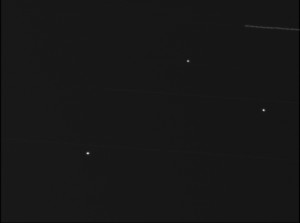