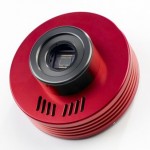 My main interest st the moment is in minor planet astrometry, particularly of brighter Near Earth Asteroids. In order to get precise astrometry of these objects it helps if they are not moving in a single frame. Slow NEO’s can have rates of several arcseconds per minute so being able to take short exposures and stacking them is often required to get precise enough astrometry. It is possible to compute the minimum exposure needed for an asteroid by ensuring it’s movement does not exceed the FWHM of stars in your image, e.g. if an NEO is travelling at 4”/minute and you have a FWHM of 4” then an image one minute in duration will not show trailing. However it is also necessary to understand what the minimum exposure you can take with your setup is to minimise noise and maximise the signal to noise ratio. And it was necessary to understand the camera characteristics in order to make that determination.

Conventional wisdom in astrophotography, particularly in the film era, has maintained that longer exposures are better at bringing out fainter details. The rationale is simple – by looking at the sky longer more photons from the fainter objects will land on the sensor. However the sky has a background brightness and this puts a limit on the length of a photo that we can take, as a sufficiently long image will be saturated by sky brightness and not show any objects; with modern sensitive CCD’s it does not take long to reach that saturation level! Objects that are brighter than the sky background will reach the saturation point of the detector sooner and become overexposed so the image may be useless long before the sky backround has saturated.

So intuitively we can see that there must be a maximum exposure of a single image.

With CCD’s and image processing we have the ability to stack several images together. The question then we need to ask is whether it is better to take a single long exposure or many short exposures totalling the same duration.

exposures gives a Signal to Noise ratio improvement of

(see http://starizona.com/acb/ccd/advtheoryexp.aspx  or ‘The Handbook of Astronomical Image Processing’ 2011). So the more exposures we have the better our signal to noise ratio.

So great! We just take lots of really short exposures! If we only had to worry about statistical random noise then yes we would. But the CCD itself has sources of noise, all which we need to ensure do not contribute to the signal to noise ratio. Thankfully there are well established processes of taking flat, dark and bias frames and any astronomical image processing software will be able to use those frames to reduce the noise in your image, but in terms of calculating our exposure time we need to ensure these contributions are minimal.

The current wisdom in CCD imaging is that you should have your sky background noise overwhelm the readout noise of the CCD. This is often stated as the readout noise should be no more than 5% of the Sky brightness.

Sky brightness is easy enough to measure. You just take several image of different exposure lenghts. All images from here on should be with the same optical setup and binning. Subtract your mater bias frame from each and your image processing software should be able to tell you the background ADU count. Divide your ADU’s by the exposure time in minutes and you have your sky background value – for me it’s around 4480 ADU/min. This will vary across the sky, in my case dramatically where I have a dark sky on one side and Dublin’s light dome on the other, so you may want to estimate it at different areas.

In the equations below the Sky brightness is expressed in electrons, so we will need to determine the camera gain in order to work that out.

The Exposure Time to overwhelm readout noise is given by:

To calculate this time we need the gain and readout noise of the camera. These are often available from the manufacturer, but these numbers may only be approximate or given with a certain tolerance so we need to measure them for our particular CCD.

This section is really a brief summary of http://www.stark-labs.com/craig/articles/assets/CCD_SNR3.pdf with my CCD measurements.

With my CCD, using 2×2 binning and temperature regulation set to 0C I captured 200 bias frames and stacked these in Nebulosity to produce my master bias frame.

I also took a series of dark frames ranging from 10 seconds to 10 minutes.

Four pairs of flat images with different light intensities with individual mean ADU’s of 3000 to 40000 were also taken.

Gain is defined as:

AIP4Win was used for all processing. The master bias frame was removed from each flat. Each pair was summed and the mean value noted. A constant pixel value of 5000 was added to the first flat before the second was subtracted to avoid negative pixel values. The variance of this pair difference was noted.

The mean and variance values for each pair of flats were plotted and a linear fit made using gnuplot showed that the CCD behaved linearly across the range and had a gain value of 0.253 e-/ADU. Atik do not publish a gain value on their website but a value of 0.263 is widely reported online. 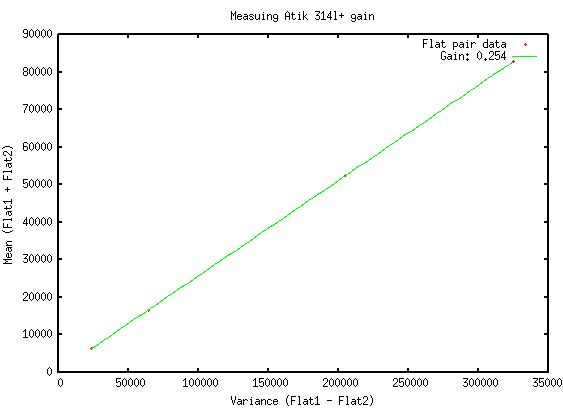 Since the response of the CCD seems linear across the range of flats taken we can note the full well depth of the CCD as just over 16k e-. Further measurements will be needed to test linearity out of the measured range ie <3000 ADU and >40000 ADU.

The mean values of stacked dark frames showed little deviation from the bias frames. Three 10 minute dark frames showed a mean ADU value of 2 ADU over the averaged bias frame. This negates the need to take dark frames for this setup as they will not further reduce noise. Defective pixels can be processed using a bad pixel map instead.

The master bias frame was created by averaging the 200 individual bas frames. 15 individual bias frames from the stack were selected and compared to the master bias frame. The standard deviation if the difference was noted and averaged and resulted in a read noise value of 21.1 ADU which corresponds to 5.34 e-. This value is low compared to most current CCD cameras, but is higher than the nominal 4e- stated by Atik and the 3.8e- value determined by a Stark Labs review.

Back to our optimal exposures

The background Sky flux levels were converted to e- using the measured gain value of 0.254.

This is almost double the time that I would have arrived at using the widely accepted online specifications of this camera of a gain of 0.267 and read noise of 4 e-.

To err on the side of caution, by assuming that the sky background can get brighter at times, and is brighter in certain directions, the minimum CCD exposure time I use is 20s. It giving me results as well as I would expect for my equipment letting me get to about magnitude 18.5 with a low SNR but still sufficient to get good astrometry.